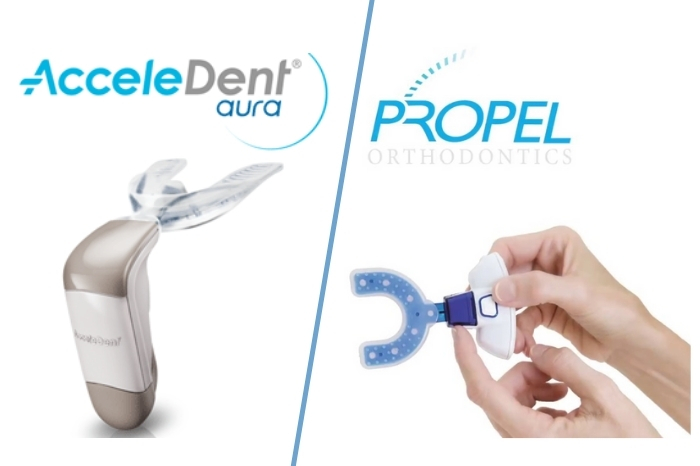 For those who are not aware of this new technology, this is an intra oral device that applies vibration for 20 minutes a day to the teeth of patients who are having orthodontic treatment.  The aim of AcceleDent/ Propel is to increase the speed of orthodontic treatment and reduce discomfort.

“Through the use of gentle mini pulses, called SoftPulse technology, bone remodelling is accelerated, allowing teeth to move up to 50% faster”.

Medland Orthodontics currently does not support the use of such device and would like to draw your attention to the conclusion below.

How much does it work?

These are a mixture of expert opinion and single case reports. Again a low level of evidence. They had, however, included a paper on a randomised controlled trial carried out at the University of Texas. So I decided to have a really close look at this.

They aimed to evaluate whether the use of Propel/AcceleDent increased the rate of tooth movement. They enrolled 45 patients (age range 12.4-40.6 years old) who required orthodontic treatment and the extraction of first bicuspids. They were randomly allocated to an active AcceleDent/ Propel device or to a sham AcceleDent/ Propel device. Each patient was followed until only 1mm of extraction space remained to be closed. Each canine tooth was retracted by sliding mechanics along 018ss wires. It appears that in every case the anchorage was reinforced by a TAD. At each four weekly visit the distance between the distal bracket of the canine and the TAD was measured with a digital caliper.

What did they find?

They presented data for 39 patients, 21 in the Propel/AcceleDent and 18 in the control groups.  They analysed the data using simple univariate statistics and I would have liked to see a multi-variate analysis that could have considered the effect of confounders, such as gender, initial position of the teeth and age.  They presented data on alignment from a sub-sample of 14 patients. This number is too low for any meaningful comparison, so I concentrated on the amount of distal tooth movement of the canines.

We all want to make teeth move faster.  I feel that AcceleDent/ Propel is an interesting concept that is grounded in science. I also wonder if  AcceleDent/ Propel could make teeth move faster along the wires because the vibrations would jiggle the teeth and reduce bracket binding? However, at present the evidence that supports its use and promotion is currently not at a high level and it would be great to see some well carried out trials.  Nevertheless, it is to AcceleDent/ Propels credit that they are putting forward their claims in a cautious way and using terms such as “may increase the speed of tooth movement”.  Their Key opinion leaders case reports are nicely presented in a great degree of detail.  Unfortunately, some orthodontists websites are not taking the same cautious approach, do a google search and see what is going on……As I have said before, it is up to us as clinician scientists to interpret the evidence and decide whether or not to use a new development.  Have a look at the evidence in more detail and decide yourselves!

The debanding appointment is the first time that you’ll get to see your brand new smile as we take your braces or attachments off to reveal your straight teeth. During this appointment, our hygienists will gently remove your braces and give your teeth a good clean.

You’ll also have a fixed bonded retainer attached to the back of your teeth to ensure your teeth don’t move and stay in their new straight positions.

At Medland Orthodontics, our commitment to you is straight teeth for life, which is why we put such a focus on post-treatment care and retention.

During your deband appointment, you will have had a fixed bonded retainer glued in place behind your upper and lower front teeth to stop them from moving out of position. We’ll also provide you with a clear removable retainer that we recommend you wear to bed every night.

It’s also up to you to keep those straight teeth looking good with regular visits to your dentist and a good oral hygiene routine.

As your treatment progresses and your teeth begin to move into their new positions, we’ll need to make regular adjustments to keep the process on track. The cost of these is included in your treatment plan; they’re usually short appointments of about 30 minutes and we’ll happily fit them in with your busy life.

If you decide to go ahead with treatment, the next step will be your impressions appointment. This can be done immediately following your consultation or at another time, whichever you prefer. During this appointment, we’ll take some photos of your teeth and smile, as well as x-rays and a 3D digital scan if required.

We’ll put together a detailed treatment plan that best suits your needs and desired outcome. It will involve an all-inclusive cost and the different interest-free payment plans that are available.